5 Ways Happiness is Good for Your Health 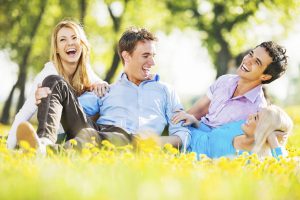 Our Cincinnati-area holistic dentistry is committed to the belief that general health and oral health are intrinsically fused. The condition of your oral health is a strong indicator of your overall wellbeing, and vice versa.

Often times, when evaluating the state of our health, we underestimate the power of one key element: happiness. Happiness isn’t just the result of a healthy, well-balanced life; it can also directly contribute to your health and ability to handle illness and discomfort.

Here are 5 ways happiness has been found to be good for your health:

If you live in the Dayton, Mason or Cincinnati areas and would like to learn more about our approach to holistic dentistry, contact Hardin Advanced Dentistry today online or at (513) 234-5531 to schedule an appointment. We welcome patients from Southeast Indiana and Northern Kentucky.

Dr. Hardin is a Las Vegas Institute Fellow, granted only after a minimum of 278 hours of advanced education and experience in aesthetics, physiologic science, and a comprehensive practical examination. Additionally, she is an Accredited Fellow of the American Academy of Cosmetic Dentistry, an accreditation granted only to those with superior performance and knowledge in cosmetic and restorative dentistry. These qualifications are compounded by almost two decades of experience and continued education.

What convinced me to try Hardin Dental, was that she not only emphasizes your smile, but also the health of my teeth.

Now I smile with confidence and I have people telling me my teeth look beautiful.

My experience at Hardin was nothing but positive. Dr. Tara Hardin made me feel very comfortable and important.

The best thing about Hardin Advanced Dentistry is that Dr. Tara Hardin is just a perfectionist with what she does in the field of cosmetic dentistry.

I had a great experience at Hardin Advanced Dentistry.

My experience at Hardin Advanced Dentistry has been wonderful.

The thing that I like most about Hardin Advanced Dentistry is the professionalism and timeliness of her staff, and the outcome of the work that was performed on my teeth.

Amazing dentist and staff and the best work ever! I highly recommend this place!

From the initial phone call to my appointment, everyone treated me very kindly. I couldn't have asked for more as a patient. Thank you all for everything.

I am so glad I am a patient here! It is a great feeling to have my "repairs" completed and now I am just in "maintenance mode with a clean bill of health at every check-up!"

Everyone is always so pleasant and every visit is a great experience.

Everything went very smoothly and they were very comforting and eased my worries.

I give them 5 stars!

Dr. Tara and her staff are the best. Organized, efficient, gentle, thorough, and very skilled are just a few of the adjectives that I would use to describe my experience.

Best dental office ever. Dr Tara is one of the most knowledgeable dentists I've ever known.